TeslaCrypt 3.0 has been recently spotted by IT security experts to be using the .micro file extension. Meanwhile, a number of users detected the infection on their computer systems. 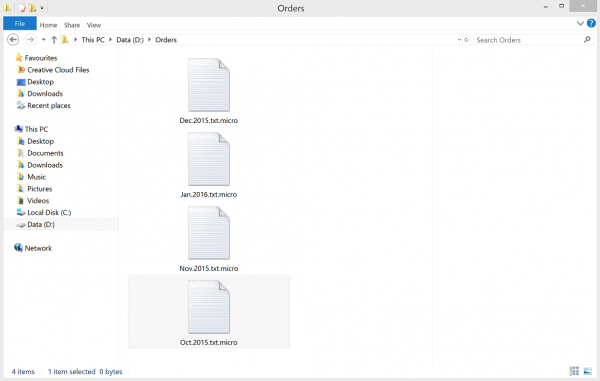 The virus promptly reports on its invasion. It issues a message called a ransom note. The message states the data on the affected device has been modified with a specific encryption algorithm. That entails the relevant software cannot read the data. Important files are no longer available to the victims.

In order to restore the encrypted files that have the .micro extension, the users are invited by the ransomware to pay the ransom. The amount varies from case to case. It is always to be paid in bitcoins. This further aggravates the detection of scammers behind the ransomware. Another obstacle is that the ransomware developers usually do not spread its copies directly. Instead, they employ affiliates. The affiliates are unrelated and typically are not personally acquainted with TeslaCrypt 3.0 developers. That is, even if you arrest a distributor, the malware developers are most likely to remain unknown.
Paying the ransom is not encouraged whatsoever.

.micro file virus exists is several editions. Some of the previous versions have been duly scrutinized. IT experts were able to offer a working remedy capable of dealing with impacts of the invasion. The resulted solutions either were able to undo the encryption or recover the latest copies of the scrambled files.

Again, so far, this is not the case with .micro file virus. Needless to say, the removal of TeslaCrypt 3.0 infection, as such, does not decrypt the data. It is due to be completed after sufficient data recovery effort has been taken.

.micro file virus target basically any data on a compromised machine. The infection scans any mapped drives available. Nearly any data is subject to the detection. The virus may omit only the files of extremely random extension. Hence, users face the need to recover almost all the files stored on their devices.

In order to get rid of .micro file virus, you will need to detect and remove all the files and registry entries associated with the threat. Kindly consult reliable malware removal guides to ensure proper extermination of the cryptic malware, as well the recovery of any decrypted data.

TeslaCrypt 3.0 (aka .micro file virus) represents a unique category of malicious software whose attack surface reaches beyond the operating system and its components, which is why removing the virus itself is a part of the fix only. As it has been mentioned, it encrypts one’s personal information, so the next phase of the overall remediation presupposes reinstating the files that will otherwise remain inaccessible.

Download .micro File Virus Scanner and Remover
No ratings yet.