Get Rid of the Losers Ransomware and Decrypt .losers Files and HOWTODECRYPTFILES.html Alert

.losers affects computer data with a powerful encryption-based transformation. This deprives the unhappy victims of the access to the readable content. The amount of data remains unchanged. However, in the case of information, the amount is only one of the characteristics; it does not count where the data is disordered so badly that it cannot be read. 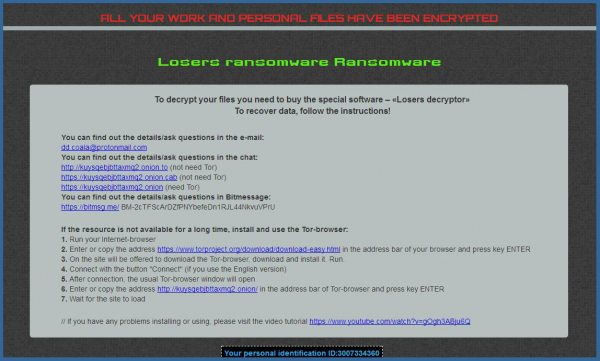 They do it for the money. ‘.loser’ is the encryption attack that demands from its victims a payment for the decryption. For this purpose, apart from encrypting the data, the malware also creates a ransom note. The note is available in several formats. You may find it at any folder among the encrypted items. The ransomware also tries to set it as a desktop background and generate relevant popup. It seems rather unlikely that a single victim would miss to read it. Well, there is one.

The .loser installation vector may include the user’s participation. A popular post on IT security forum by the victim of the .loser ransomware invasion says the ransomware stems from the installation of a common app for DVD writing, Burn4free. The free installation included, apart from the target item, the malware in question. That occupied the computer system, despite the reporting user removed all the suspicious files and processes. The user found all the data hit by the infection was unreadable. It got extra extension reading, ‘.losers’, hence the name of the threat.

You do not need to remove .losers related file. In the case outlined above, the user thus removed .losers ransom note. The ransom note would prompt to pay bitcoins for the decryption, but also could provide further hints for ransom-free recovery. In any case, to get rid of .losers with current tools and routines consult the sections below.

Losers virus represents a unique category of malicious software whose attack surface reaches beyond the operating system and its components, which is why removing the virus itself is a part of the fix only. As it has been mentioned, it encrypts one’s personal information, so the next phase of the overall remediation presupposes reinstating the files that will otherwise remain inaccessible.