Ransomware lineages come and go, but the one called GandCrab stays. Indeed, there are very few ransom Trojan species that survived the plummeting that began in late 2017. The above-mentioned strain, though, appears to be thriving and evolving regardless. Its latest variant is an upshot of several conspicuous changes made by the extortionist crew in charge. First of all, it has switched to using the .KRAB extension for encrypted data objects. As before, the actual filename remains unaltered, so a sample file 1.png transforms into 1.png.KRAB. One more modification is that the ransom note it drops is named KRAB-DECRYPT.txt. 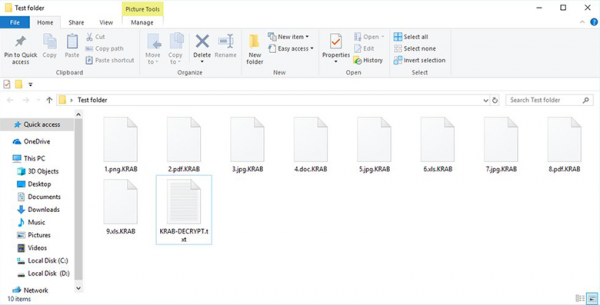 The .KRAB edition of GandCrab ransomware is distributed in several ways, including a brand new vector that wasn’t the case previously. Malicious spam continues to be a major source of the contagion, though. The perpetrators have been deploying malspam campaigns that deliver booby-trapped emails to thousands of users. These messages contain trojanized attachments mostly disguised as invoices. Once a recipient opens the embedded file – typically a Word document – the tricky macros technique comes into play. Since the contents of the attachment aren’t properly rendered, the would-be victim is prompted to enable macros to view the information. This being done, a surreptitious script triggered behind the user’s back downloads the ransomware in no time.

A fresh payload execution mechanism used by GandCrab v4 authors involves toxic software cracks. While looking for a way to activate some popular application without paying for its license, people may lose vigilance and end up downloading a crack tool that goes bundled with the blackmail virus. These tricky downloads tend to be hosted on rogue software portals set up by the ransomware peddlers. 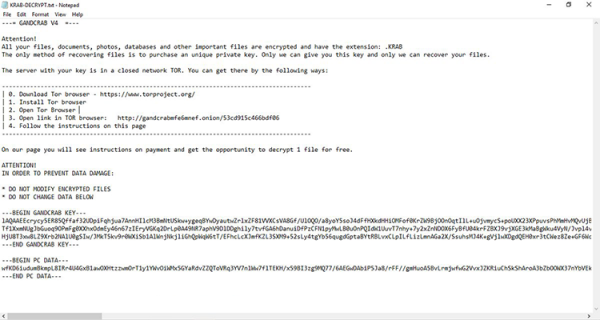 When up and running inside a host computer, the .KRAB files virus traverses the data repositories for potentially valuable files. It looks inside the hard drive, removable drives if any, as well as network shares. When performing the scan, the pest items that match a predefined set of common data formats, focusing on personal documents, pictures, videos, databases while skipping executables whose obliteration may lead to system errors. Next, GandCrab v4 encrypts the spotted files using a cryptosystem called the Salsa20 stream cipher. Again, every such file gets the new .KRAB extension concatenated to it.

As soon as the victim’s important information becomes inaccessible, the culprit drops a ransom note named KRAB-DECRYPT.txt. It says,

“Attention! All your files, documents, photos, databases and other important files are encrypted and have the extension: .KRAB. The only method of recovering files is to purchase a unique private key. Only we can give you this key and only we can recover your files.”

The how-to document also provides a link that the victim is instructed to open in Tor browser. It leads to a payment page that demands a ransom in either Dash or Bitcoin. The amount reportedly varies, but it’s usually somewhere between $800 and $1,200 worth of the cryptocurrency. In case the victim doesn’t cough up the extorted sum within three days, it automatically becomes twice as big as the original size. Even if the payment is made, though, it’s likely that the attackers won’t follow through on their promises, therefore those infected should try all alternative recovery techniques first. See below for details.

GandCrab v4 represents a unique category of malicious software whose attack surface reaches beyond the operating system and its components, which is why removing the virus itself is a part of the fix only. As it has been mentioned, it encrypts one’s personal information, so the next phase of the overall remediation presupposes reinstating the files that will otherwise remain inaccessible.