.java File Virus – Dharma Ransomware imposes encryption on certain files it can reach upon installing its components into a target device. Dharma ransomware, once designating a specific threat, now rather indicates a somewhat generic name for the viruses developed from the same prototype. Java virus, accordingly, is one of such specific implementations of Dharma Ransomware. 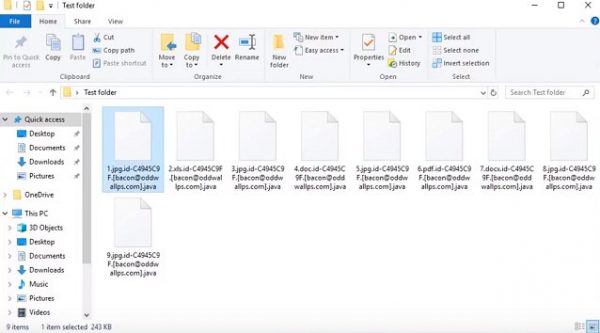 .java Virus owes its name to adding the .java extension to the names of the files it hits. It also tends to add email address at the end of the files corrupted. The outcome corresponds to the following pattern:

For instance, the user nicknamed neco423reported the following file transformation, obviously due to the ransomware invasion: filename.id-406B4F5A.[[email protected]].java.

The .java Virus – Dharma Ransomware is readily available from darknet or illegal online communities. Still, even if one manages to get a copy of the trojan to distribute it as an affiliate, there is no such tie with the master crook that would expose the latter’s identity.

Easy access to the infection makes it available for all sorts of criminals. However, the infection vectors do not seem to vary greatly as might be expected. It tends to stick to a mere spamming. A victim usually receives a letter asking to open the attachment. The opening triggers the ransomware download and installation followed by the malicious encryption. The encryption itself is really strong enough, so trying any plain approaches like brute-forcing would rather waste your time. The implementation might offer some flaws, and for certain versions of Dharma Ransomware master decryptor key or attack-specific keys are actually available thanks to the intervention of malware hunters.

The .java Virus informs its victims of its demands and the kind of attack ongoing with its ransom note. Obviously, the user also can contact the crooks via email. The follow-up is always the same and simply urges the users concerned to transfer a certain amount of bitcoins to the wallets of the crooks. To say the least, there are no guarantees while the amounts claimed could be really in excess of the user financial means and value of the information endangered.

Free guidance and tools for removal of the encryption caused by .java Virus – Dharma Ransomware follow.

new Locky variant aka Java File Virus represents a unique category of malicious software whose attack surface reaches beyond the operating system and its components, which is why removing the virus itself is a part of the fix only. As it has been mentioned, it encrypts one’s personal information, so the next phase of the overall remediation presupposes reinstating the files that will otherwise remain inaccessible.