GIBON Ransomware does not differ profoundly from other variants of ransomware. Just like any infection, this variant needs to be installed on a computer system. That enables the hackers to execute the encryption-for-ransom-payload. 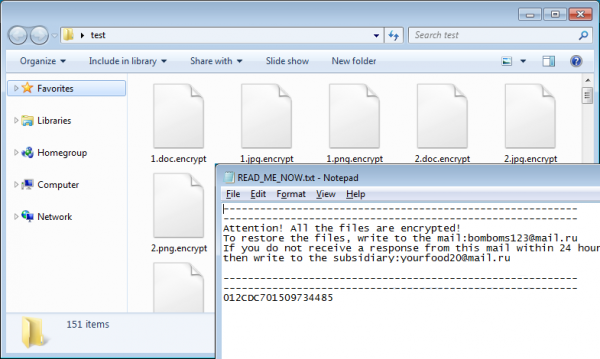 All victims would see the .encrypt extension added to the files processed by the ransomware with the encryption tool. It is basically a meaningless suffix. The relevant software may be unable to render the data due to the inappropriate extension. This is not a big deal, though. The real issue is the encryption that wrecks the data proper. It cycles the contents a number of times. Each cycle is strong enough to withstand a plain brute-forcing. The encryption by GIBON ransomware is thus invulnerable to direct decryption.

While the scrambling by GIBON ransomware is extremely sophistication, the way the virus propagates is rather plain. The crooks are free to choose any propagation tactic, be it a war-driving or a drive-by download. However, there is one scheme that dominates. It is as plain as a blank message spamming. This is also known as the blank slate letter dissemination. The attack is not that plain. The campaign is selective, so it is a targeted spam. Its design provides for that the victim opens a malicious JavaScript attached to the message. Few would do so unless the attachment indicates their personal details. That is to say, the spam, though the body and the subject line are void, contains a zip file attached. Name of this file includes, among other details, email and name of the recipient. This has duped too many users into opening the JS.

The JavaScript drops and installs GIBON ransomware into a preset folder. It also contacts the remote server notifying it of the successful infiltration and basic details of the compromised device. This stage is followed by the scan that defines the data to be encrypted, and the encryption itself.
Once the encryption is over, each item affected has its name extended with .encrypt. Each folder containing such encrypted data also has a notification file. This addresses the user prompting to contact the attacker by email. The attackers are to set the ransom amount in the response to the email from the victim. The sum is payable in Bitcoins.

So far, there is a no master key or another magic wand for ransom-free decryption. Payments to the crooks also do not ensure the data is duly restored. Hopefully, the tips and tools outlined below to recover the data hit by GIBON ransomware to the extent that at least satisfies your basic needs.

new Locky variant aka GIBON File Virus represents a unique category of malicious software whose attack surface reaches beyond the operating system and its components, which is why removing the virus itself is a part of the fix only. As it has been mentioned, it encrypts one’s personal information, so the next phase of the overall remediation presupposes reinstating the files that will otherwise remain inaccessible.

Download GIBON Virus Scanner and Remover
No ratings yet.