Get Rid of WannaCry Ransomware and Decrypt .WNCRY Files

Starting with the cellular operator Telefonica in Spain and hospitals in the UK, the extortion virus known as WannaCry already attacked more than 250,000 computers around the world. Most of the attacks were recorded in Russia. 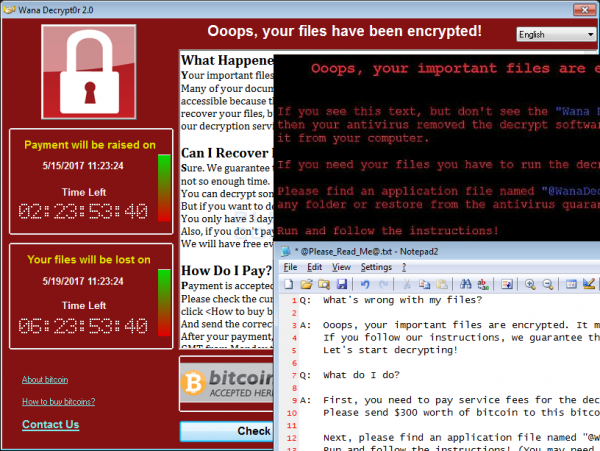 WannaCry or WCry infects only Windows computers. It encrypts user files, changes their extension to .WNCRY, and requires you to buy a special key. You should pay in Bitcoins. According to the latest information, it’s 600 USD, previously reported about 300 USD. Otherwise virus threatens to delete the files. The name WannaCry appears in the name of all infected files. Users only have 3 days to make a payment, after which the price will be doubled, and if they do not pay within 7 days, they will not be able to restore the files.

The malicious program gets distributed by e-mail. The developer of Avast antivirus assumes that the cyber group called The Equation Group created this virus. They used stolen hacking tools earlier developed by the US National Security Agency.

The attack occurs through a known network vulnerability known as MS17-010. Then the rootkit gets installed on the infected system. Using this rootkit, the attackers may start the encryption program.
The first version of the virus WannaCry appeared in February. Now it operates in 28 different languages, from Bulgarian to Vietnamese.

Who is already already infected with WannaCry?

The healthcare system in the UK was completely paralyzed because the virus blocked most files with patients’ data. WannaCry infected at least 25 hospitals. The attack succeeded because computers were not updated on time, although the vulnerability patch was released by Microsoft in March. According to Reuters, employees of the British National Health Service were warned of the threat on Friday, but it was too late.

If you have Windows and your computer is not infected yet, you need to install all available updates. Other operating systems are not at risk.

In some cases, paying a ransom for hackers will allow you to unlock files, but it does not always happen. Plenty of users already transferred their money to the creators of the virus.
If your computer is already infected, you can hardly do anything. If you have a backup, you can restore everything after reinstalling the system. If you do not have backups try following our tips below.

WannaCry virus represents a unique category of malicious software whose attack surface reaches beyond the operating system and its components, which is why removing the virus itself is a part of the fix only. As it has been mentioned, it encrypts one’s personal information, so the next phase of the overall remediation presupposes reinstating the files that will otherwise remain inaccessible.