How to Remove GandCrab Virus and Decrypt .Gdcb Files

Another wave of ransomware propagation circulates GandCrab virus; this release features a range of peculiarities making it a stand-alone specimen. 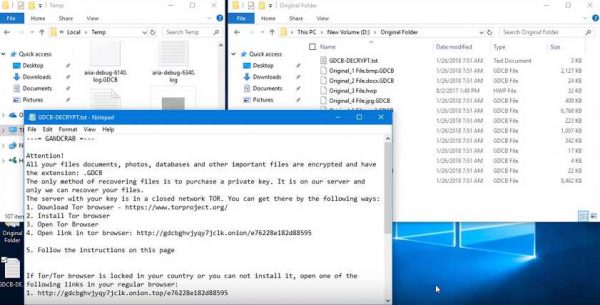 First off, the malware is one of a kind as it accepts payments in DASH. Most of the counterparts stick to bitcoins, with few minor exceptions, neither of which is DASH (another cryptocurrency).

Second trait worth noting is the GandCrab ransomware hosting its remote server with .BIT domain unrecognizable for common DNS. This aggravates tracing back of the scammers. On the other hand, the encryption trojan may fail to connect to the remote server. The connection to .BIT domain runs through NameCoin decentralized system (what a surprise: the decentralized currency is used for the ransom transactions). This is a peculiar if not sophisticated method, hence the connection might fail. Leaping up ahead, if that is the case the infection keeps on running its processes in the background. It basically tries to finally reach the destination, its remote hub in the NameCoin system.

Recent updates to the research on the encryptor reveal its infection vector. GandCrab typically installs into computer systems with fake bills delivered as attachments in PDF. As the user opens one, the document displays a prompt requesting to enable a macro. Opening the macro, predictably enough, discharges the malicious application into the memory. At this point, it tries to connect to the remote server and might fail due to the reasons outlined above. The follow-up to the failure is no idling; the malware repeats its attempts and may execute other processes. Needless to say, it is good to remove GandCrab encryption-for-ransom before its connecting to the remote server, and the best option is to avoid any ransomware invasion.

The remote server, if reached by the ransomware, dispatches a public key meant to scramble the data on the host device. Meanwhile, the infection also connects to ipv4bot.whatismyipaddress.com. This enables the infection to clarify the victim’s IP.

Prior to proceeding with the encryption itself, the infection scans the computer system for the processes as specified in its internal instructions. This might disable security apps, if any, installed on the compromised machine.

GandCrab applies reasonable precaution to enable the affected system survival in the basic operating mode with networking. With that purpose, it excludes relevant files types and locations from the list of encryption targets.

There is another oddity as the infection generates UAC prompt by executing the following file created in Windows directory [launched_file_name].exe.

Finally, it is time to communicate its demands to the target audience. GDCB-DECRYPT.txt is the ransom with a preliminary message. Its instances are scattered throughout the memory of the computer. A user opening one would learn that a typical scenario of ransomware invasion is unfolding. The message dropped into the memory leads to the online GUI, the latter indicating amount and terms of payment for the key that allegedly decrypts the data on a host machine. The price would amount to DASH 1.54 (circa 1000 USD).

Ransoms paid to the crooks behind ransomware contribute to their welfare and do not necessarily decrypt the data as promised. To this end, the workarounds laid down below features recovery and other ransom-free approaches to remove GandCrab ransomware for good.

new Locky variant aka GandCrab Ransomware represents a unique category of malicious software whose attack surface reaches beyond the operating system and its components, which is why removing the virus itself is a part of the fix only. As it has been mentioned, it encrypts one’s personal information, so the next phase of the overall remediation presupposes reinstating the files that will otherwise remain inaccessible.