If your files have .fantom file extensions that typically certifies these files are no longer readable. The reason why virtually any software cannot render such files is the encryption attack. 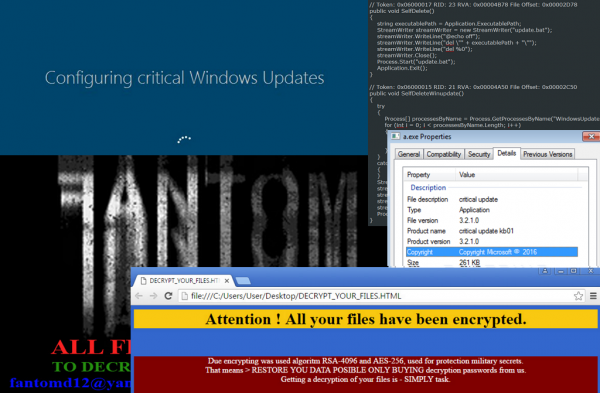 Just like any advancement around, the encryption works both for good and evil. It may protect your data from unauthorized access. The criminals cannot abuse the data, even if they manage to intercept the communication. On the other hand, the same criminals benefit from the scrambling developments. They encode private data depriving its legitimate holder of access to valuable personal or business information.

The latter is the case with .fantom scrambling. It is the malicious one. The aim is to make the data holder pay the ransom. Otherwise the data cannot be read. To implement the attack, the extortionists have developed dedicated software. It is commonly referred to as Fantom ransomware; obviously, according to the name of the extension it appends to the affected items.

Imagine you are a cyber criminal. You have developed the ransomware. Does it pay at once? Of course, it does not. Perhaps, the true challenge is to drop it onto computer systems. In the case of .fantom, its makers rather abstain from distributing it directly to the victims. Instead, they make it available on affiliate terms via darknet forums. The ransomware developers are sophisticated enough to remain anonymous in every transaction. Of course, security enthusiasts and even cyber enforcement can impersonate a malevolent actor and get a copy of the virus. That does not help to disclose the identity of the developers, though. All we know so far is that the principal actor is likely to reside in Russia, and the ransom note indicates Russian email; it also contains a range of stylistic and grammar mistakes suggesting the author is not a native speaker.

The distributors apply quite common propagation routines to deliver the .fantom to the target. First off, they resort to spamming a message that fakes important notification. Despite the receiver is still to open the attachment, the tactic has yielded a great number of victims.

Upon landing on target PC, the ransomware installs its files at the background. The installation processes are smartly obfuscated so that the invasion does not trigger antiviral protection. Indeed, the virus has managed to install on corporate network computers that enjoy enhanced cyber protection.
Having completed the installation, the ransomware scans the affected computer memory for nearly any type of files. It only avoids critical system files. That is not because of its fair will; the only reason is that the virus needs the affected system to keep on running so that the victim would read or hear the ransom note.

When encrypting the shortlisted files, the ransomware may display a fake Windows screen. The popup would pretend to show the progress of critical system update installation.

The scan is followed by the malicious encryption. It is strong enough so that a brute force attack will not do. To communicate with the victims, the .fantom creates a message setting it as a desktop wallpaper and dropping its copies into every folder. That instructs the users to pay some bitcoins (an equivalent of USD 300 and more) for the decryption key. To say the least, paying the ransom is not the best option for any user concerned. True, there is no magic wand to undo the scrambling at once.

However, there are some workarounds that hopefully will restore the data affected by the malicious scrambleware.

Fantom virus represents a unique category of malicious software whose attack surface reaches beyond the operating system and its components, which is why removing the virus itself is a part of the fix only. As it has been mentioned, it encrypts one’s personal information, so the next phase of the overall remediation presupposes reinstating the files that will otherwise remain inaccessible.