Do Not Fall Victim To “EXS” Armada-Collective Invoice “EXS” Scam

“EXS” Armada-Collective Invoice “EXS”, aka “EXS” Armada-Attack!!! “EXS” is a spam message that demands from the recipient to pay 1 BTC. The payment is allegedly due for the detections of the security test on the machine of the addressee. Unless the payment is made, the obnoxious sender states the actual testing may start anytime. 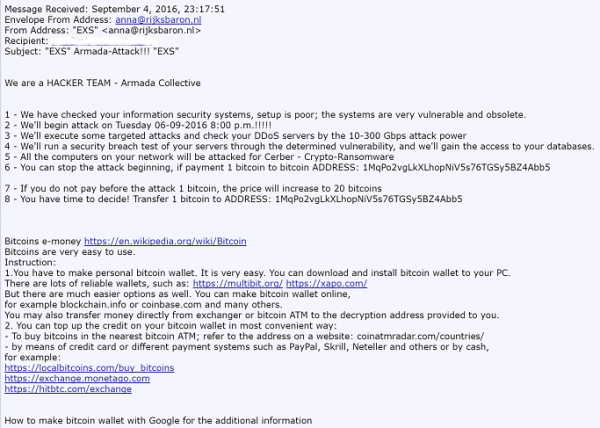 The initial payment of 1 BTC (circa 608 USD as of the middle of September 2016) is for the initial check. The great testing will cost you 20 BTC (over USD 12,000). The sender also calls the testing an attack. It seems to be inevitable, but all the mess will cost you one Bitcoin only if you pay off right now.

A number of users have received this message. The Internet community keeps on discussing the scam quite vividly. The smart scammers are quite aware that few if any, users would pay the amount demanded. Most of them would not read the message at all. LOL and delete that trash!

However, some do open and learn the message. Many take it seriously because the scammers resort to targeting with spam. A target spamming may indicate personal information of the recipient has come from a corporate email. One of the recipients, nicknamed Kopperdrake, has proven to be really scrupulous about the email. He learned from the sender’s field the email was a corporate one. All of a sudden, the company registration referred to the village in the neighborhood. The telephone of the office was out of service, so Kopperdrake drove to the location.

The guy who opened the door acknowledged it was his email, currently abandoned. The news that the hackers are currently using the mailbox for blackmail fraud stunned the poor fellow. Unfortunately, any of such cases so far have not resulted into any clues on the criminal’s identity.

All you need is to remove “EXS” Armada-Collective Invoice “EXS”. Any payments to the crooks are of no use. Some over-cautious users raise the question of why the crooks change the Bitcoin wallet. They have a solid reasoning: since the address is always new, the crooks know which victims have not paid. Well, the actual reason to change the wallet is to complicate the task for the forensics. The scammers are well aware that very few would pay for their so called testing.

The real threat is that the spam may contain a virus. Since you have opened the message, a malicious routine my trigger. To avoid and remove any “EXS” Armada-Collective Invoice “EXS” related viruses, proceed with free scan available below.