Ykcol file virus, also known as Locky ransomware, hacks computer data rather than a computer system. It ensures the system remains functional. The infection is an interactive threat. It needs its victims to communicate with its distributors. That is why the essential system files remain intact. 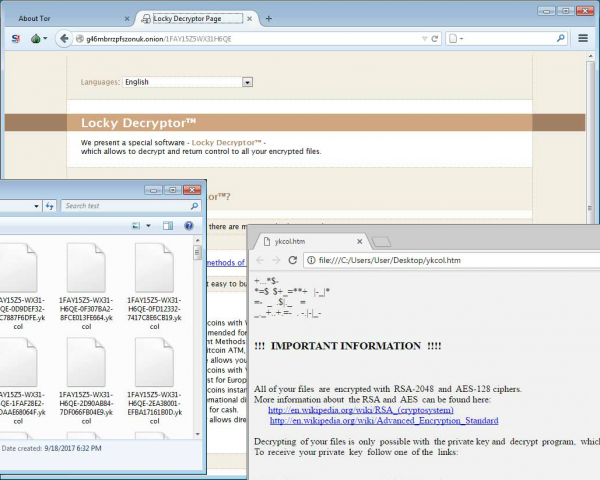 This new ransomware was reported on September the 18th, 2017. It is a stand-alone specimen. Meanwhile, IT experts observe the strong link between this release and Locky virus. As regards the ykcol, it basically tends to modify the names of the items it hacks according to the following pattern:

That is to say, it renames both the original filename and the extension, yet adds a unique ID.
The infection is available from the initial-releasers and perhaps from sub-releasers for affiliate distribution. Basically, anyone can sign up to a darknet forum and get a copy of the ransomware. This implies a number of distribution tactics and their implementations. The distributors also set the amount payable, which typically varies around 0.25 BTC. Meanwhile, Bitcoin itself is a fluctuating currency. At the end of the August 2017, BTC is convertible to USD at the rate of above 4,000 USD per 1 BTC. Needless to say, the amount is quite substantial, even for a corporate user.

To encrypt data, the ransomware resorts to popular variants of AES and RSA ciphers. The private key is the pin that would cycle the data back. However, this does not enter the computer system during the encryption. It is the public key that the ykcol file virus uses to modify the content. This public key, however, cannot decrypt the processed data.

True, the private key stems from the public key. The relation is very complicated, though. It is expressed through the equation of the utmost complexity. To resolve it, one needs to harness the most powerful computer for a period that would last for decades or even hundreds of years.

The ray of hope for the victims of the ykcol ransomware is that the IT security has cracked some versions due to the flaws in the use and implementation of the encryption. Besides, the instructions below provide the best practice of ransom-free data recovery tailored for ykcol ransomware.

new Locky variant aka Ykcol file virus represents a unique category of malicious software whose attack surface reaches beyond the operating system and its components, which is why removing the virus itself is a part of the fix only. As it has been mentioned, it encrypts one’s personal information, so the next phase of the overall remediation presupposes reinstating the files that will otherwise remain inaccessible.