Get rid of GANDCRAB V2.0 virus and decrypt .CRAB files

GranCrab extortion virus spotted in February 2018 hit a number of users. This attracted authorities and security firms. In order to help the victims who suffered the ransomware invasion, Romanian national cybersecurity and Europol hacked the remote command-and-control center behind the malware. The server contained some of the keys applicable to recent attacks.

As those decryption keys were not directly applicable, private security companies broke in and developed software capable of making use of the catch. The victims in need hopefully decrypted their data with those key and with the software.

The crooks behind the attacked ransomware soon came up with their announcement. They promised to improve the existing version, including the security of the remote control server. They were true to their promise as on March 5, 2018, another virus surfaced. IT researchers promptly traced it back to the original release. It contained several essential differences. 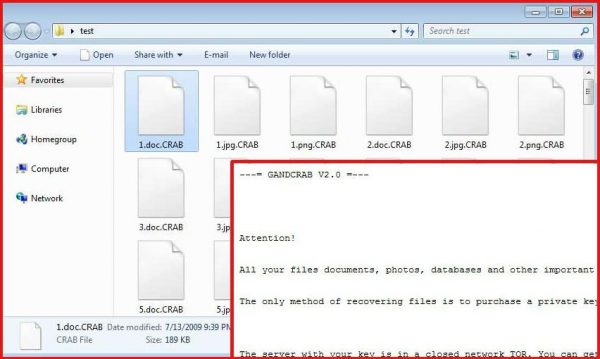 The crooks, of course, moved to another command-and-control server abandoning the one hacked by the authorities. They have attributed somewhat mocking names to their new hosts. politiaromana.bit clearly refers to Romanian police, malwarehunterteam.bit mentions the white-hat hackers also engaged in the campaign against the ransomware.
To reach those servers the virus is to complete a rather complex procedure. It does not use a traditional DNS. Just like the initial version, the second one makes use of TLD. This allegedly aggravates unauthorized access to the remote server. As we can see, the authorities have nevertheless been able to overcome this protection measure. On the other hand, this kind of DNS connection indeed complicates communication of the ransomware with its remote nod. It might simply fail to establish a connection and is thus unable to proceed with the encryption.
In general, the second release does not differ much from the original. The essential novelties, apart from the above, include as follows:

New GandCrab V2.0 Ransomware represents a unique category of malicious software whose attack surface reaches beyond the operating system and its components, which is why removing the virus itself is a part of the fix only. As it has been mentioned, it encrypts one’s personal information, so the next phase of the overall remediation presupposes reinstating the files that will otherwise remain inaccessible.