Cryptolocker is an advanced crypto virus. Its copies infiltrate computer systems to hold the data encrypted for ransom. All files start to have the .micro extension. The encryption standard applied by the infection is virtually invulnerable to any decrypting attempts without the original encryption key. 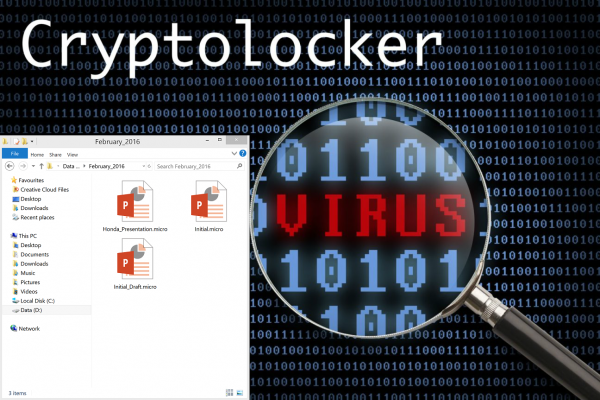 The above does not encourage victims to purchase the key as prompted by the Cryptolocker ransomware. However, this article would not conceal the truth, either. The likelihood of decrypting data with .micro file extension by way of white-hat hacking is subtle.

The ransom virus propagates via sophisticated distribution networks. The ransomware makers abstain from dropping its copies into computers directly. They offer the virus for propagation on affiliate terms. The offers are in abundance at dark net forums.

The developers of Cryptolocker communicate with potential distributors via TOR and VPN protected channels. The anonymity of parties is ensured.

A distributor of Cryptolocker ransomware may adjust the amount, installation and behavior patterns of the infection. The developers do not recommend setting an excessive amount of payment. However, even one Bitcoin is a certain sum of money.

Paying the ransom is not the best option. Moreover, cases have been reported of the Trojan failing to dispatch the decryption key correctly. The victims, despite satisfying the hacker’s demands, failed to restore access to their valuable data.

The distributors of the ransomware may inject the virus immediately into the corporate network and encrypt and add .micro file extension to all types of files. If that is the case, they tend to adjust the infection so that it would encode each machine individually. That enables the ransomware to claim payment for decrypting each affected device. Imagine a corporate network of hundreds of computers to grasp the scale of the scam.

The distributors are not restricted in opting for Cryptolocker infection vector. The above scenario is but one of the multiple options.

Removal of Cryptolocker Trojan is a must. Whether you pay the ransom as prompted, the malware remains at your PC until after you get rid of Cryptolocker installed components. Proper recovery and removal guidance follows.

Cryptolocker represents a unique category of malicious software whose attack surface reaches beyond the operating system and its components, which is why removing the virus itself is a part of the fix only. As it has been mentioned, it encrypts one’s personal information, so the next phase of the overall remediation presupposes reinstating the files that will otherwise remain inaccessible.