Get rid of CERBER3 virus and decrypt .cerber3 files

Cerber3 ransomware pretty much resembles its predecessors – the first and the second releases of the same infection. The hackers issue new editions of the malware to fix vulnerabilities of the malicious encryption implementation. The flaws spotted and explored by IT security circles in the older releases enabled to develop free decryption tools. The infection may update its encryption routine and other features within a single version. However, as the number of flaws becomes critical, the crooks tend to make a decisive step and stun the Internet community with a stand-alone edition. 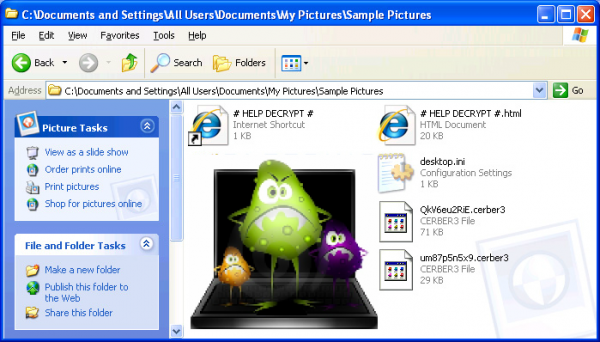 First reports on Cerber3 ransomware date back to the end of the summer, 2016. Again, the IT security observers have predicted the release. The ransomware remains true to its generic characteristics. Its victims would face the same ugly notification that the ransomware plays via the speakers. It also hijacks desktop background so that users would inevitably stumble upon the ransom note.

The most obvious difference from the earlier releases features the extension name. Now, you are going to see the file names extended with .cerber3 string. The virus would also scramble the filenames.

Thereby, a victim cannot distinguish between the items affected. Since the infection may offer a test decryption for several items, that further aggravates the situation.

To encode the data, the Cerber3 makes use of Advanced Encryption Standard (AES). The output is sufficiently remote from the input so that a brute force attack cannot retrieve the original files. Theoretically, such option exists, but the deciphering would last far beyond an average human lifespan. The ray of hope is that the previous iterations had vulnerabilities that enabled IT security to come up with ultimate decryptors. The scrambling method applied as such is strong enough, though.

Dropping the ransomware on a computer system involves a range of infection vectors. In most of the cases, the virus infiltrates with spam email and fake updates. The hackers are not restricted in opting for any other propagation routines, though. They may attack directly large corporate networks expecting to compromise a number of machines at once.

Once the installation completes, the rogue reports to its remote server. The communication is obfuscated so that general firewall is unlikely to intercept it. The AES encryption applied by the Cerber3 is a symmetric algorithm. That is, a decryption key is an exact copy of the encryption key. However, the key is only available on a remote server so that you cannot retrieve it from the affected computer.

Further details consider the removal of Cerber3 virus and the recovery of data it has scrambled.

Cerber3 represents a unique category of malicious software whose attack surface reaches beyond the operating system and its components, which is why removing the virus itself is a part of the fix only. As it has been mentioned, it encrypts one’s personal information, so the next phase of the overall remediation presupposes reinstating the files that will otherwise remain inaccessible.