.BACKUP extension, as added to the names of the files stored on a computer system indicates Cryptomix Trojan has compromised the system and completed its malicious payload. Its core action reworks files to be found on the attacked device with a military-grade scrambling method. This basically leaves no chance for any, even the most powerful computer of our age, to reverse the files affected to their original state. 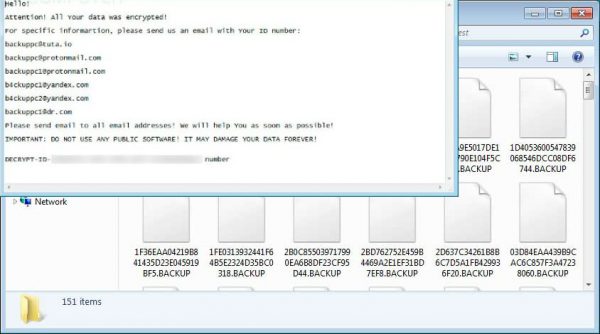 Ultimate goal pursued by .BACKUP ransomware is to get money from the users of the computers it hits. The trick follows its due course as the infection drops its ransom note that notifies of the encryption completed and prompts one to pay for the decryption.

To that end, .BACKUP is a variant of Cryptomix ransomware. One of its distinct traits is the updated ransom note. The amendments chiefly relate to the new set of email addresses indicated. A victim is supposed to contact one, for instance, [email protected], for detailed instructions on the transaction to be completed.

The ransomware goes beyond encrypting file content and adding its. BACKUP extension as a hallmark. It also shuffles original filename so that it becomes gibberish.

To get installed on a computer system the ransomware resorts to a variety of tricks. It is available from its developers in a number of online hubs hosting more or less criminal affairs. Entry barriers are low enough so that roughly anyone can engage into the malicious business. However, masterminds of the scam remain anonymous not only to the victims; they keep their identity undisclosed for the mediators, too.

Meanwhile, most of the attacks deploy through mass-mailing. Be it a targeted spam or general circulation of the infection, the user may easily avoid the ransomware installation. It should only be a must to verify the content entering the machine, even if you believe the recipient is among your trusted acquaintances.

There is no ultimate decryption for the infection as of now. A mere removal of .BACKUP ransomware does not work magic to restore the files encrypted. However, paying the ransom is a tricky and unfair solution, both in terms of likely issues in receiving and applying the decryptor and providing further incentives to the scammers.

The guidance below enables ransom-free assistance in the recovery targeting the .BACKUP encryption-for-ransom.

new Locky variant aka .BACKUP File Virus represents a unique category of malicious software whose attack surface reaches beyond the operating system and its components, which is why removing the virus itself is a part of the fix only. As it has been mentioned, it encrypts one’s personal information, so the next phase of the overall remediation presupposes reinstating the files that will otherwise remain inaccessible.