Get Rid of Locky Ransomware and decrypt .locky Files

Locky ransomware poses a threat to virtually any data. It is a computer virus that, once installed (usually with the help of MS Word documents containing malicious macros) scans its host machine for the files of specific extensions. The extensions cover nearly any known formats. Hardly a bit of information is not subject to the detection. 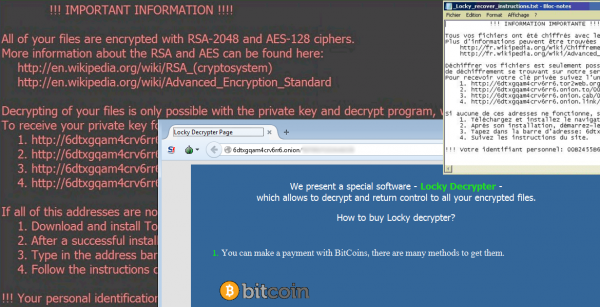 Further on, the invader applies a complex decryption. The modification renders the detected items into the unreadable format with .locky file extensions. To read the data, relevant decryption key shall apply. The key could only be derived from the hacker’s server. It cannot be intercepted as the files are being encoded.

Locky virus does not hack the data for fun. The virus is commercial stuff. Its makers expect the victims to pay the ransom. Detailed instructions are listed in _Locky_recover_instructions.txt, which infected users see on their desk. The ransom is a prerequisite of dispatching relevant decryption key.

Crooks will be crooks. If you pay the ransom demanded, the decryption key is to be transferred by the rascals. Some say it’s the same gang that was behind Dridex. Cases of failure to send the key have been reported by the victims encountering similar ransomware attack.

The Locky infection propagates via unrelated gangs. The ransomware developers do not spread the virus directly. On the other hand, the developers enable the distributors to manually adjust the virus behavior. It is easy to predict multiple maladjustments. Some may lead to failure of the decryption key dispatching. Hopefully, the same may lead to the encryption flaws. That contributes to ransom-free decryption.

Hence, each person engaged into the scam can both cheat and get cheated. The developers may refuse to issue the key. The distributors may fail to pay the commission and to transmit the key to the victims. The victims may make use of the encryption flaws to restore access to the data affected.

The ransom is to be paid in Bitcoins. A unique TOR channel serves each payment. The anonymity of the parties is ensured. The payment workflow is subject to further scrutiny. It may happen that several workflows apply. The possibility of the distributor receiving the full amount and transferring its part to the developer cannot be excluded. The risks inherent at the stage of exchanging the developers due to the decryption key, as well as further transferring the key to the victim shall not be underestimated. That is to say, ransom-free decryption is a preferred method, even if the victims are ready to pay as the importance of the affected data is too high.

Good news is that the history of cracking similar ransomware includes a significant record. That is, the victims may reasonably hope for the data decryption tools to be provided by the white hats in the nearest failure. Meanwhile, IT experts suggest applying general recovery routines.

Last but not least, the victims shall remove Locky ransomware; the removal, however, shall only complete after satisfactory data recovery has been achieved.

Locky represents a unique category of malicious software whose attack surface reaches beyond the operating system and its components, which is why removing the virus itself is a part of the fix only. As it has been mentioned, it encrypts one’s personal information, so the next phase of the overall remediation presupposes reinstating the files that will otherwise remain inaccessible.